The end of the Census count is approaching, and we need as many of our residents to respond as possible. Each response means more federal funding for Oakwood. Your response is important to our whole community, and it only takes a few minutes.

Three Ways to Complete the Census:

You can complete the 2020 Census one of three ways. 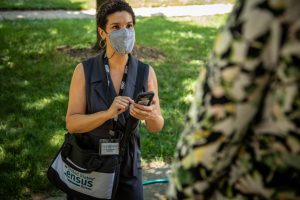 Workers are going door-to-door to help you respond to the 2020 Census. Make sure anyone who claims to be from the Census Bureau has an ID badge with their photo, a U.S. Department of Commerce watermark, and an expiration date. Census workers may also carry Census Bureau bags and other equipment with the Census Bureau logo.

Remember, your privacy is being protected. It’s against the law for the US Census Bureau to release Census responses in any way that could identify you or your household. By law, your responses cannot be used against you and can only be used to produce statistics.